Investing in Brookline can take many different forms. But establishing a fund at the Brookline Community Foundation (BCF) is one way to ensure your investment in our community can have a continuing positive impact today and well into the future. Learn about how longtime resident and BCF supporter Steve Heikin created a fund to have a lasting impact on Brookline youth.

As a Brookline resident for over 30 years, Steve Heikin believes in investing in the community he calls home. An architect and urban planner by training, Steve is an active member of the Planning Board, which he also represents on the Housing Advisory Board. He is also a member of the Brookline Community Foundation’s Board of Trustees and of the Pierce School Building Committee. “I like doing this because it keeps my head in the game,” says Steve. “I’m glad to do my part for Brookline with the knowledge and experience I have.”

Steve originally moved to Brookline in 1988 with his wife Emily Novick, an attorney who specialized in workers compensation. When the two met, Steve lived in Cambridge and Emily lived in Dorchester. She was also in the process of adopting a baby. “At the time, I thought ‘oh these things usually take a long time.’ But it happened quickly, and soon we had our son Ben.” Steve and Emily married a year later, and moved to Brookline to ensure Ben had access to the great public school system. A few years later, they adopted their second child, Aaron. Both their children went to the Pierce School and to the Pierce School Extended Day Program. Emily was an active member of the Pierce Parents Board and deeply committed to their children’s education. “Coming here for school was a great idea, because both of our children needed extra support and benefitted from the special educational support they received in Brookline,” said Steve.

In addition to her contributions as a member of the Parents Board, Emily was also a member of the Board of Trustees at the Brookline Community Foundation in the early 2000s. She stepped down from the Board after being appointed an Administrative Judge in the Department of Industrial Accidents in 2008.

Unfortunately, Emily was unexpectedly diagnosed with lung cancer in the summer of 2012 and passed away later that year. In her will, she left money to BCF to start a fund supporting a long-time passion of hers and Steve’s: ensuring Brookline youth had access to meaningful, engaging enrichment opportunities. “Growing up, our kids had a diverse group of friends: friends in the METCO program, friends who lived in public housing, friends who were also receiving special support at school,” explained Steve. “And we saw firsthand how many of those kids struggled to access the out-of-school time supports and programs in Brookline. That’s why we were early supporters of the Brookline Teen Center. Paul Epstein, who was the founding light of BTC, was also our son Ben’s guidance counselor at BHS and was a great guide for him. I remember thinking how incredible it would have been if BTC was around when my kids and their friends were in high school.”

To support the work of BTC and other programs and organizations focused on providing meaningful, engaging opportunities for Brookline teens, Steve and BCF established the Emily Novick Fund for Teens, a field of interest fund that supports the enrichment of all teens who live or go to school in Brookline. Since its establishment in 2013, the Emily Novick Fund for Teens has supported the Brookline Teen Center, Parks and Open Spaces, Mass General Hospital’s Center for Cross Cultural Student Emotional Wellness, and more. Additionally, as a field of interest fund, BCF can distribute grants from the fund to a wide variety of programs that support youth and teens, while Steve can remain assured that every grant made from the fund is going to causes deeply important to him and Emily.

Today, Steve is retired from his professional career as an architect, but is still actively involved in the Planning Board and BCF’s Board of Trustees. He remains close to his sons and grandchildren, and is now partnered with a wonderful woman, Rhonda Postrel. “I’m happy to have found someone that wants to spend the life we have together,” Steve shared. And the Emily Novick Fund for Teens continues to make a positive impact on the lives of teens who live and go to school in Brookline. “Just a few months ago, I got together with both of my sons and my grandson,” Steve explained. “My grandson really likes the Coolidge Corner Clubhouse, so we went there for lunch. The last time we went, there were tables on the sidewalk outside. This time, those tables were set up in a beautiful little parklet. When we got to the tables, there were little placards on them saying that the parklet was created by teens from BTC with The Brookline Parks and Open Space Division and The Town of Brookline Department of Public Works (DPW). I realized that the fund Emily started helped create this. There were tears in my eyes. To happen upon this with my kids, who inspired the fund, was a truly special moment.” 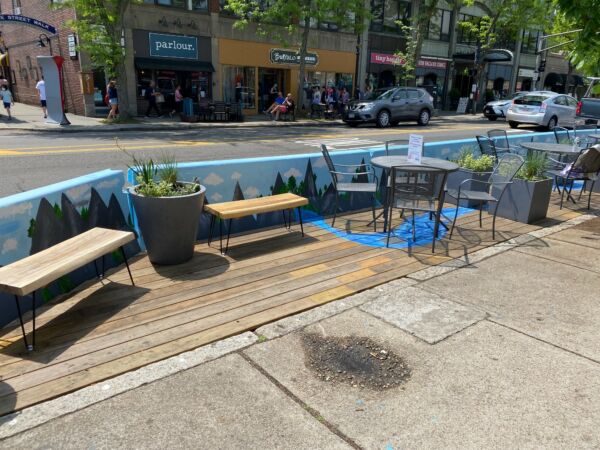 One of the parklets created by BTC, Brookline Parks and Open Space Division, and DPW in Coolidge Corner, Brookline MA.

If you are as inspired as we are by Steve’s story and are interested in learning more about existing funds at BCF or how to set up your own, please contact Amy Silberstein to discuss how we can help you invest in the Brookline community.